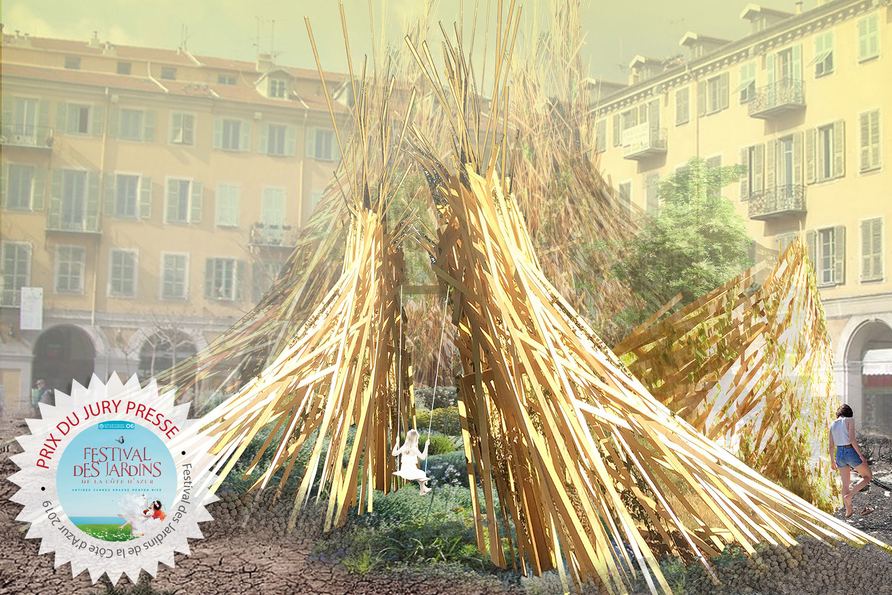 Our Mediterranean dream is a wild garden, inspired by garrigue environments, which stimulates our five senses and brings autonomous nature spaces into cities, which harmonises and balances without man’s help.

On board a swing, an object of desire and nostalgia, we want to embark the visitor in a singular dreamlike way to experience the conquering garden and pioneer of the Mediterranean, the one that takes on the most hostile environments.

The visitor walks in the unfertile urban environment and is attracted by an imposing structure which, like an oasis, shelters a garden. It moves forward and crosses a dry and hostile environment, composed of rock, ashes and sand. Mysterious seed bombs lay on the ground, thrown randomly. Some plants begin to sprout here and there, pioneering and conquering, they crack the ground crust and crack the clay of seed bombs. These brave herbs guide the visitor to a central garden, rich and fertile ; he follows the wings of the structure which invites him from the distant streets.

At the end of his journey the spectator is invited to explore this wild, virginal garden as if we were sitting on a swing. Nobody walks in this central garden, but flies over it, as if this vegetal paradise were unreal, as if it did not really exist. The sensations collide and mingle in this Mediterranean and wild garden known as garrigue. From these mobile lookouts, we are immersed in a vaporous and dreamlike universe to live a unique experience.

And yet, crossing the arid as an initiatory quest, the visitor was far from suspecting the secret garden that promised him this escape in the heart of the garrigue, freeing from time and forgetting about the city life. Our dream is an anthem to the strength of plants that, triumphantly, are reborn despite inhospitable conditions.

Before entering the garden, the visitor goes through a dry and desert environment but also discovers the irresistible ardour of the plants to grow. At the heart, he discovers the swings, playful objects, which allow him to visit the garden while "dreaming". He is motivated by the seed bombs he discovers along his route and throughout the garden, to play a part in re-greening our cities. 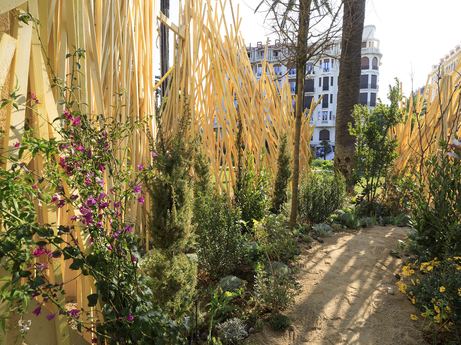 Curious and frantic team, the Ma.Gy collective is composed of Marguerite Ribstein, Landscape Designer and Grégory Cazeaux, Architect “DPLG” (Graduated by the Government) and Landscaper. Through the association of architecture, landscape and town planning, Ma.Gy seeks to develop strong, innovative projects, combining architectures and plants, in order to think about solutions to make our world more human, ecological and creative. Through their training and their experiences as well as their personalities, their sensibilities and their imaginations, they form a complementary, multidisciplinary and passionate duo. (LYON) 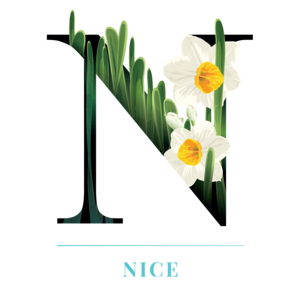